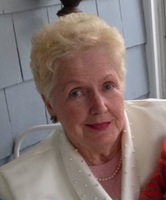 Judy is survived by her 4 children, Peter Stickle, Jeffrey Stickle, Karen Judith and Susan Cronin; from her first marriage to Byard Stickle, who predeceased her in 1968. Additionally she has 4 grandchildren, Amanda, Ethan, Meagan and Allison; to whom her laughter will sorely be missed.

She loved entertaining and was the first one to throw a party, make a party or go to a party. Her Christmas Eve parties were legendary for the amount of desserts she would make and serve. She enjoyed dancing, drinking, laughing and General Tso chicken from her favorite Chinese restaurant. Coffee ice cream and Dusty Road Sundaes with extra malt were her choices on her many trips to Dairy Queen.

She married Bill Tredway (1924-2013) and the two of them enjoyed taking long rides in their new Cadillacs at the spur of the moment - one day to Delaware for pancakes or to the Dells of Wisconsin to buy cheese. Together they adopted many of the older unadoptable dogs from the pound and presided over many dog birthday parties as an excuse for a party with the grandchildren. To her, ice cream was the “nectar of the gods”. She also avidly fed the ducks at Pond Bridge in Boonton on the Rockaway River, downstream from Chestnut Street where she lived almost her whole life, in houses built by her great grandfather.

Her favorite things were walking her dogs early in the morning, gardening and her koi pond. Judy liked to say that “she was strong like bull” and she was. She was a good ice skater, a strong swimmer and walked faster than her size would indicate.

Almost always music was playing in her house or car with her tastes running Willie Nelson to Chubby Checker to Glenn Miller. Her position as an office manger for Dr. Mamoun, where she worked for many years until retirement. Her high school motto was “always happy, always merry, a very efficient secretary” and she was, indeed, always happy, always merry and always laughing.

She died peacefully after a long illness on May 13, 2022. During her long illness, she had many people that truly cared about her and will miss her also.  She was one of a kind, always looked great and was always upbeat. She will be missed by all whose lives she touched.

There will be a private ceremony for Judy at a later date.

If you would like to make a donation in honor of Judy, please do so to the Montville Animal Shelter, 7 Church Lane, Montville, NJ 07045, where she adopted her many many dogs, or to the SPCA.  She was all about the dogs!