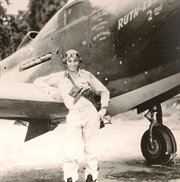 Richard W. Plahn Veteran Pilot Richard Warren Plahn died on Tuesday, Nov. 19, 2013 with both daughters at his side. He was 98; just weeks shy of his 99th birthday. Born Dec. 12, 1914 in North Arlington, NJ, he was raised in Boonton, NJ. He was a graduate of Boonton High School in 1934 and a graduate of Casey Jones Aeronautical School in Newark, NJ in 1936. He served in the National Guard 102nd Calvary -Essex Troup in 1937. In 1941, he enlisted for service in the US Army Air Corps (US Air Force). Richard was a veteran fighter reconnaissance pilot in the Pacific Theatre in WWII. Capt. Plahn's tour of combat duty began in October 1943. He holds rank of Lt. Colonel and he wears the Distinguished Flying Cross, the Air Medal with 2 Oak Leaf Clusters, the Asiatic Pacific Ribbon with 2 Bronze Stars and the Southwest Pacific Service Ribbon. He served in active and reserve duty for a total of 28 years. Following the war he graduated Stephens Institute of Technology in 1950 with a degree in Mechanical Engineering. He worked as a mechanical engineer for 32 years at Air Craft Radio in the Boonton Township. Flying was his passion. He served at the Boonton YMCA for 40 years in all different leadership roles from President to Board of Trustees. He was a lifetime member of the VFW, American Legion and the Boonton United Methodist Church. He also served on the Board of Alderman for the Town of Boonton. Surviving are two daughters; Barbara Infranca (husband Danny) of Costa Mesa, CA; Nancy Sadlon of Bound Brook, NJ; three grandsons Roger, Michael and Gordon. He was predeceased by his beloved wife, Ruth B. Plahn and his parents Richard and Ida Darress Plahn and extended family. The family cordially invites you to a Memorial Service on Sunday, November 24, 2013 at 1 pm at the Boonton United Methodist Church. The interment will be private at the Succasunna Presbyterian Cemetery. Arrangements are in care of the Codey &amp; Mackey Funeral Home of Boonton. To share a memory or extend condolences, please visit www.codeymackeyfh.com. Contributions in Richard's memory may be made to the Boonton United Methodist Church, 626 Lathrop Ave., Boonton, NJ 07005 (In memo section please write RICHARD PLAHN).